The Altena 61′ OC (open cockpit) is a well-proportioned motor yacht, combined with traditional and modern elements. The round-bilged hull has a modern transom, classic flared bow and a light sheer. Stainless steel dorades and a ship’s bell on the bow provide a nice classic contrast to the modern design of the wheelhouse with its large windows. The wide gangways are on the same level with aft and foredeck, they are surrounded by a robust stainless steel sea railing, which improves safety. To enjoy the view, you can choose from the forward cabin with integrated bench, from where you can access the foredeck, or the spacious transom bench in the open cockpit. The swimming platform can be reached via one of the two stairs in the transom.

The lazarette is accessible through a large electro-hydraulic valve, which is held up by two robust hydraulic cylinders. There is a crane available to hoist the bicycles and the dinghy from and on board. There is enough space for the bicycles.

The engine room can be reached from this room via a door with toggle lock. All technology is easily accessible here for inspection and maintenance. For a quick inspection, the engine room can also be entered through a hatch in the cockpit floor. The engine room has tear plate on the floor and plates, with holes, against the walls and ceiling. Behind this the insulation material is applied. There are two John Deere 6 cylinder diesel engines of 230 hp each. It also contains water separators for the two propulsion engines. The water is drained underwater and only the exhaust gases disappear through the exhaust in the stern, which ensures an enormous noise reduction. In addition, a fuel centrifuge is present, which circulates the fuel from the tanks. This reduces the chance of bacteria forming in the diesel. On a panel in the engine room are the analog engine instruments. The ship is equipped with a CAN bus system, so that everything is integrated in a central control system from Yachtcontrol. This is intended as a back-up in the event of a failure in the on-board network. The batteries, chargers and inverters are installed in a cool place outside the engine room.

With Hydronautica’s remote control, the ship can even be controlled from a distance. The steering position consists of no fewer than three large displays. Here you can read and operate just about everything, from navigation data from the Simrad equipment to the engine data and the on-board network. Furthermore, on the dashboard there is a throttle, the steering wheel and the controls of the hydraulic bow- and sternthruster.

The Altena 61′ OC has a nice cruising speed of about 14 km/h at approximately 1400 rpm with a consumption of 11 liters per hour per engine. From 1500 rpm, the bow rises slightly and the height of the stern waves also increases.

The Altena 61′ OC has a spacious wheelhouse, a large kitchen and two cabins with private bathroom. The salon sofa comes from a furniture store and is incorporated into the interior in such a way that you do not see that it is a separate sofa. The taupe-colored leather upholstery of the furniture is also reflected in the helmsman’s seat and passenger couch. The view from the luxurious helmsman’s seat is perfect, partly thanks to the attractive round corner windows at the front and the low panelling. Together with the oak floor and cherry panelling, a pleasant atmosphere has been created. The staircase on port side descends to the centrally located kitchen and dinette below deck. Here you have a little more privacy. Four people can eat at the dinette. The large kitchen has a white version, which is placed in a corner arrangement on the port side. The guest cabin has all the necessities, namely a spacious double bed, good closet space, sufficient light, ventilation options and an escape hatch. In the bathroom, the wall between the shower cubicle and the guest cabin is made of milk glass. This provides extra light. 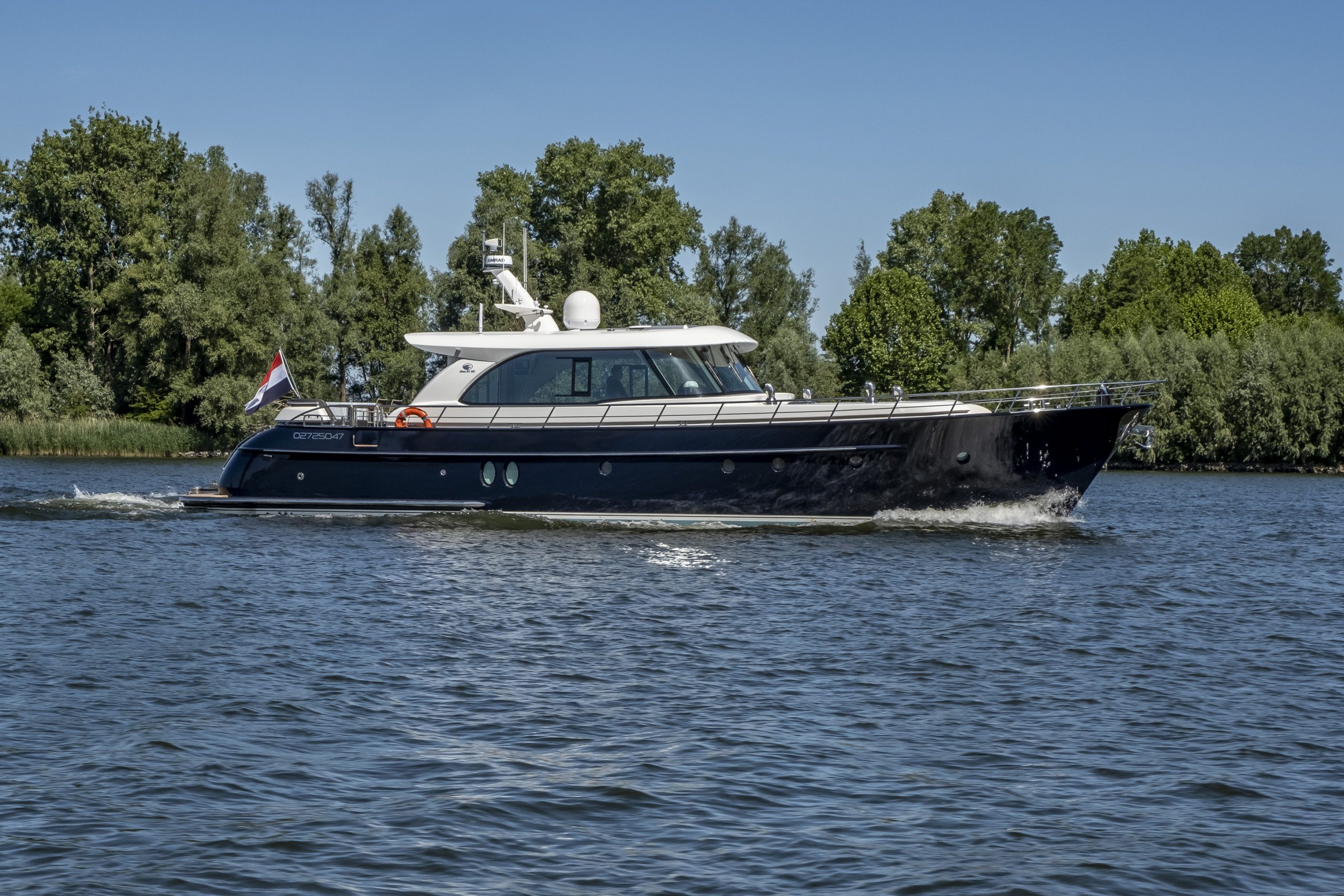 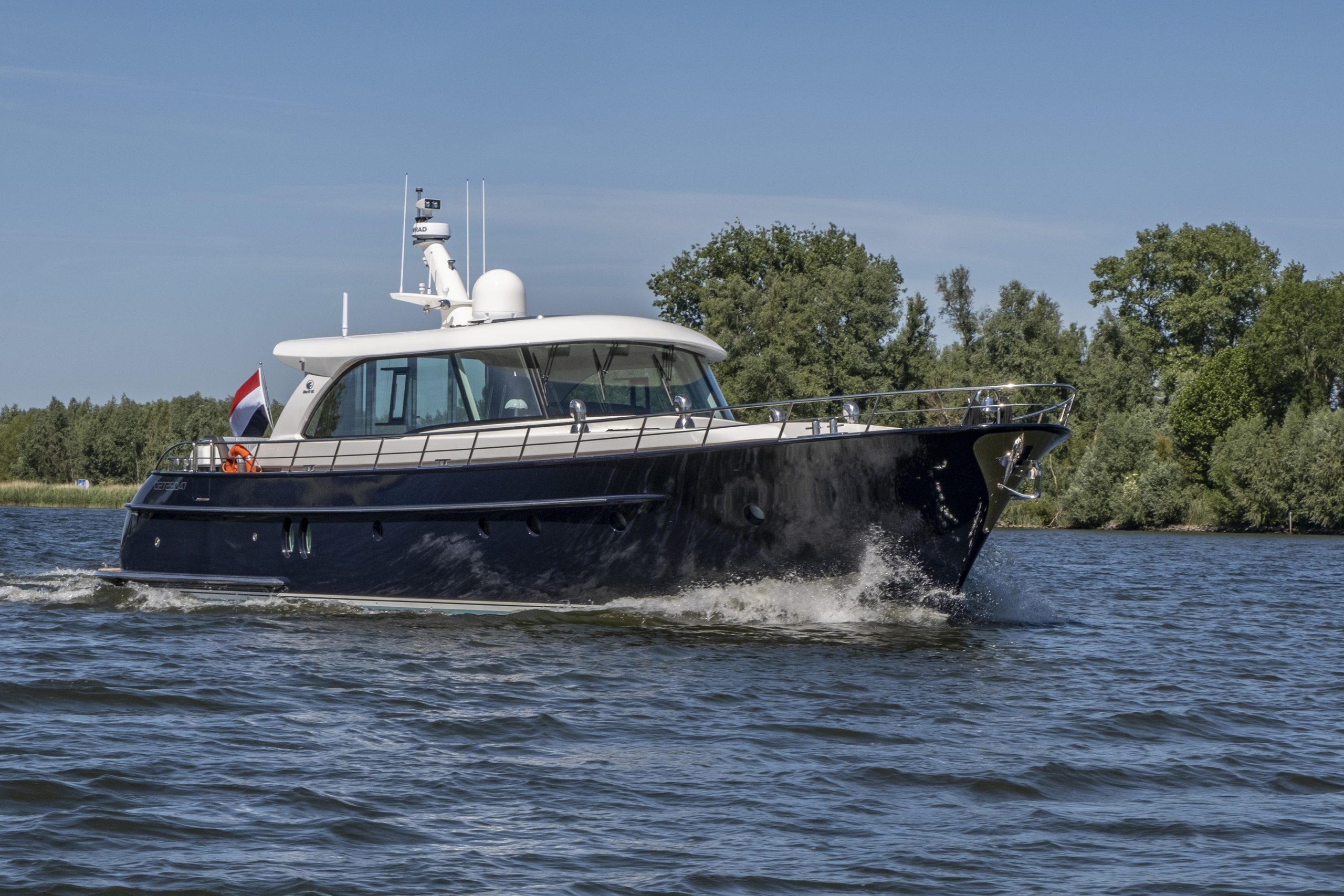 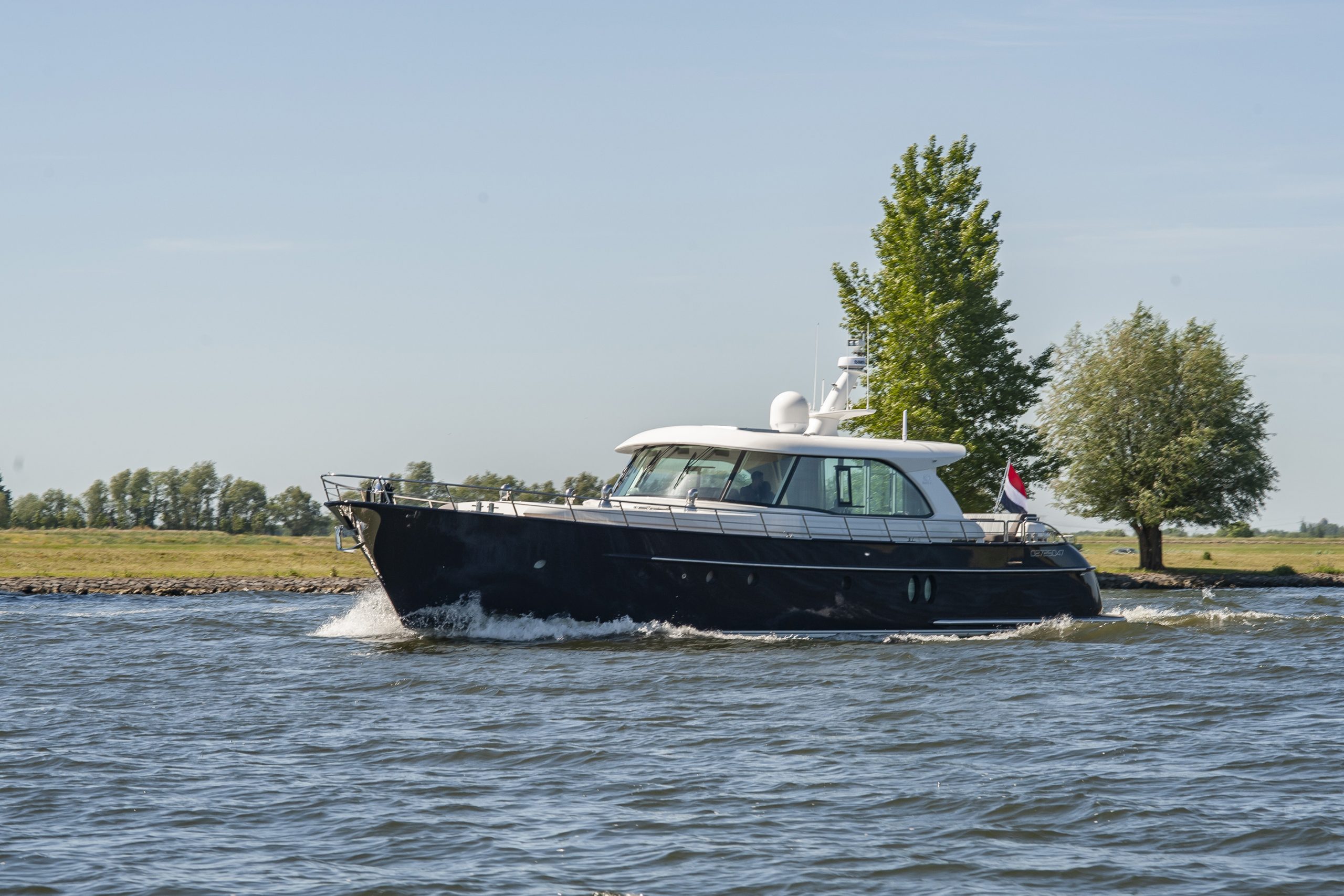 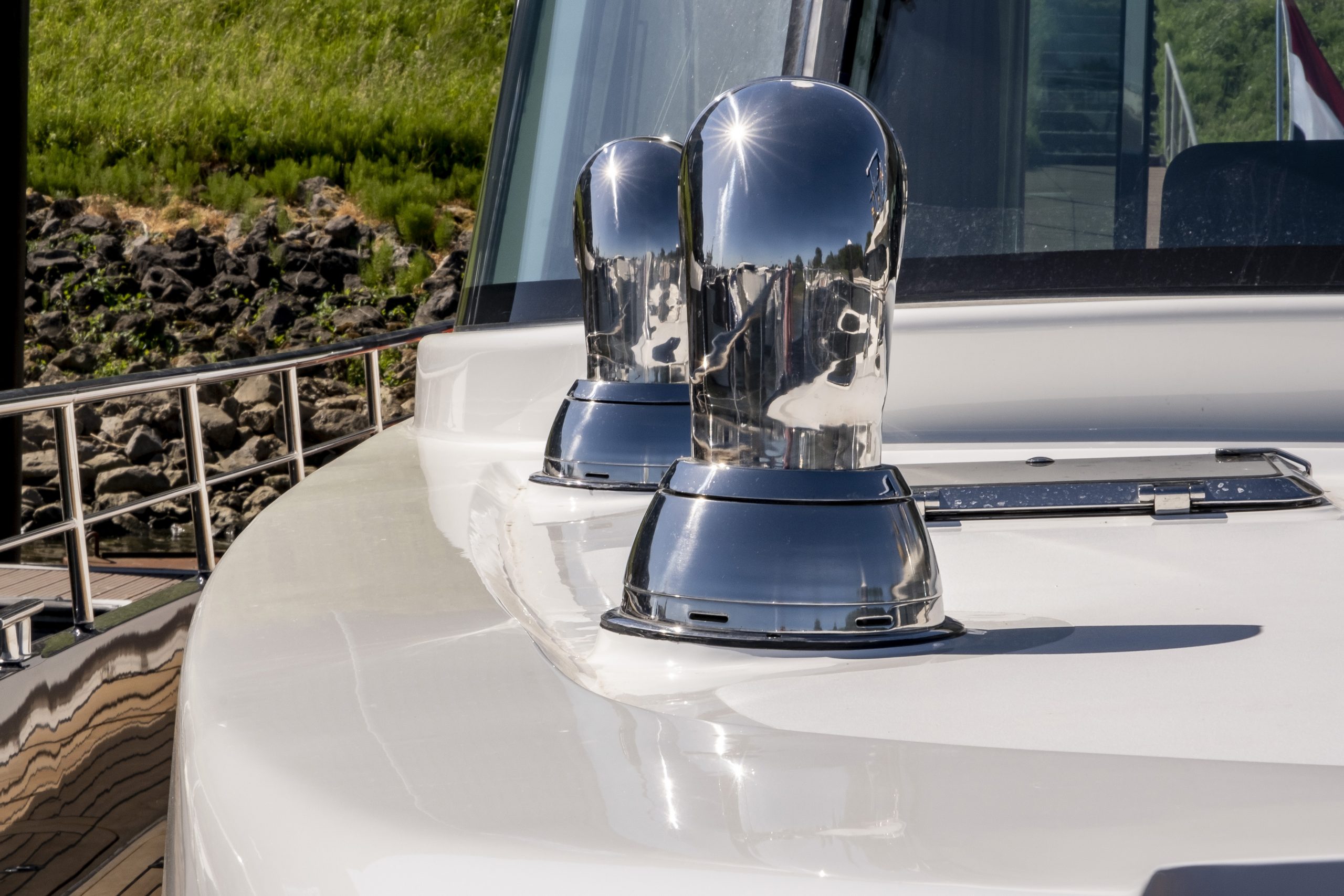 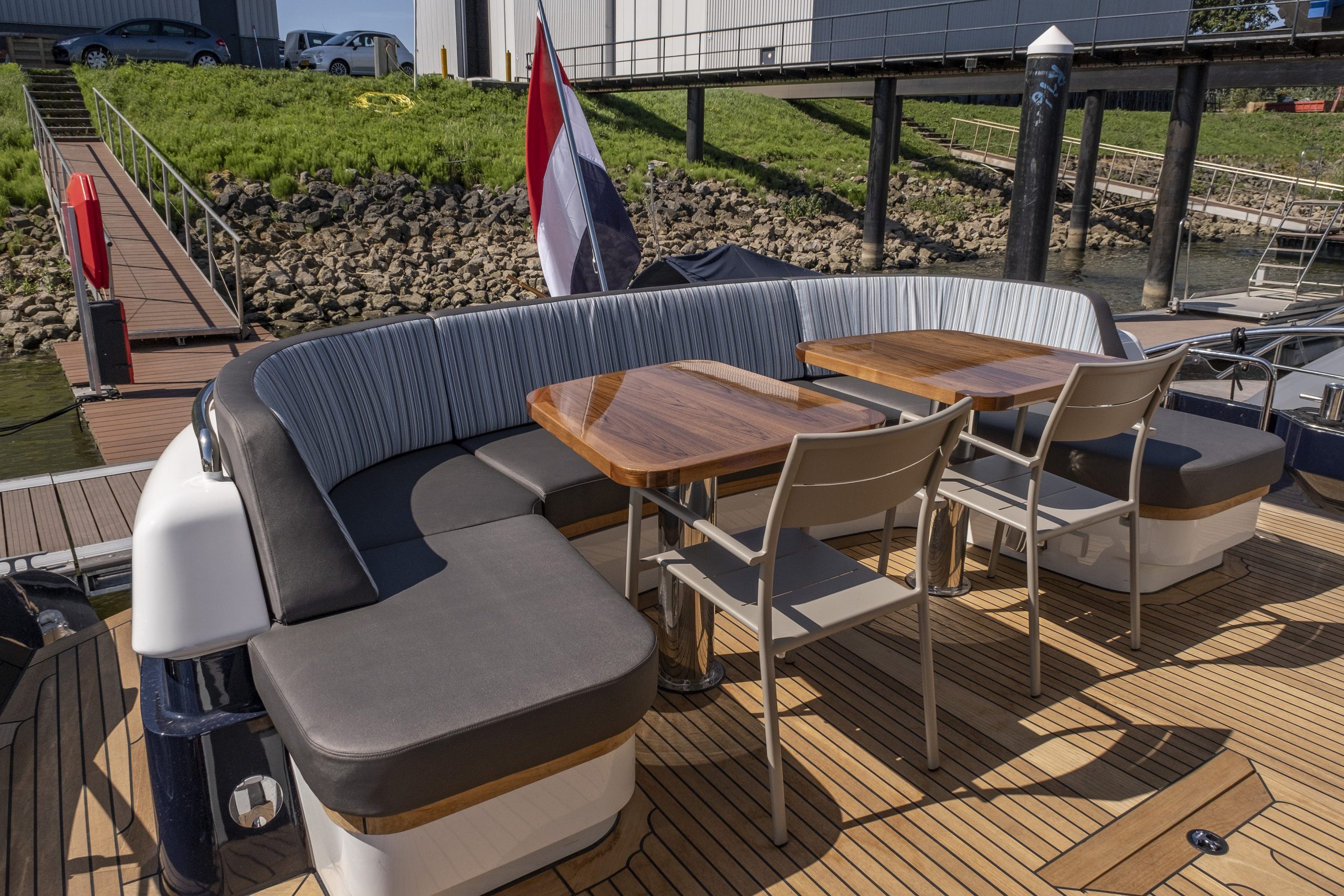 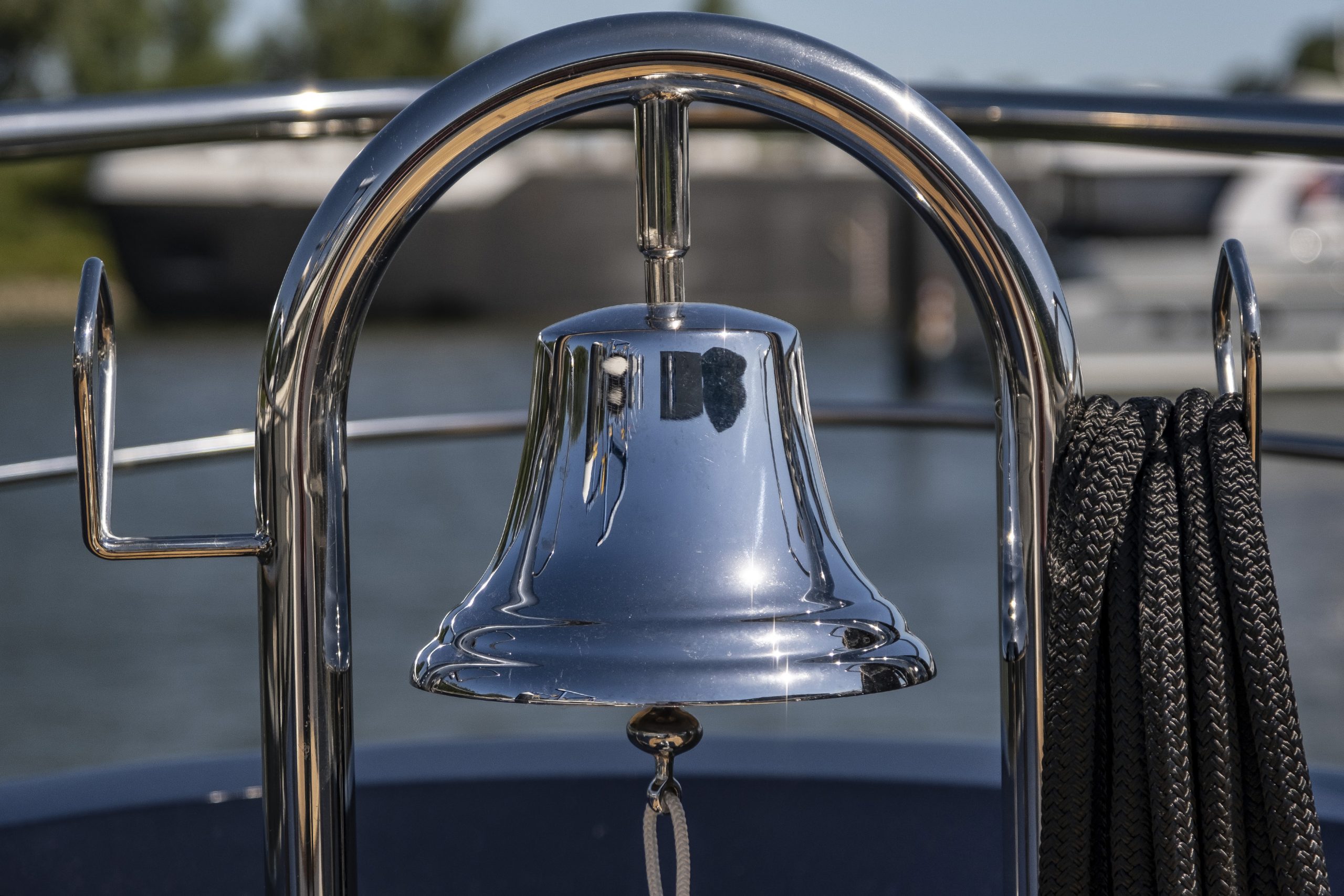 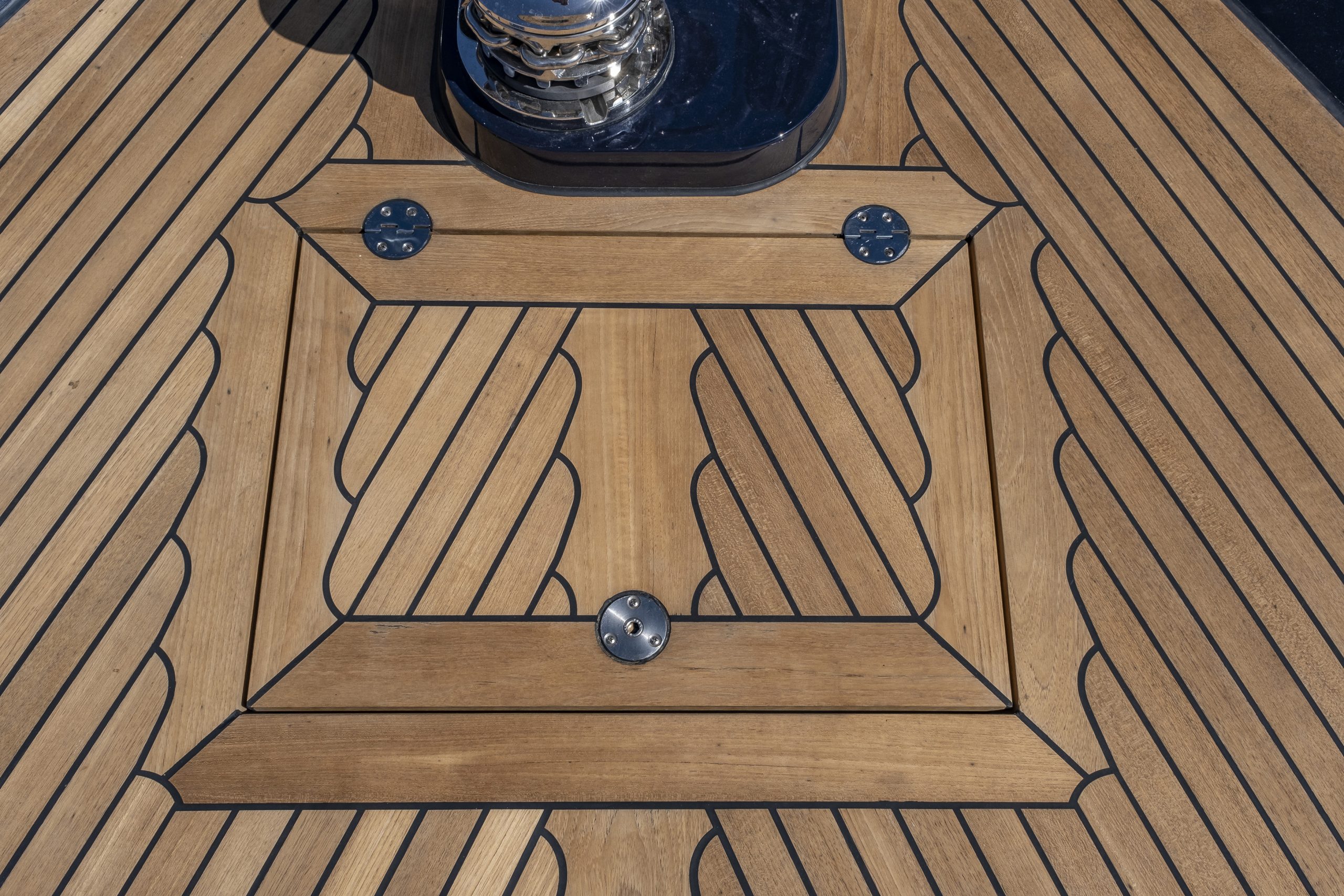 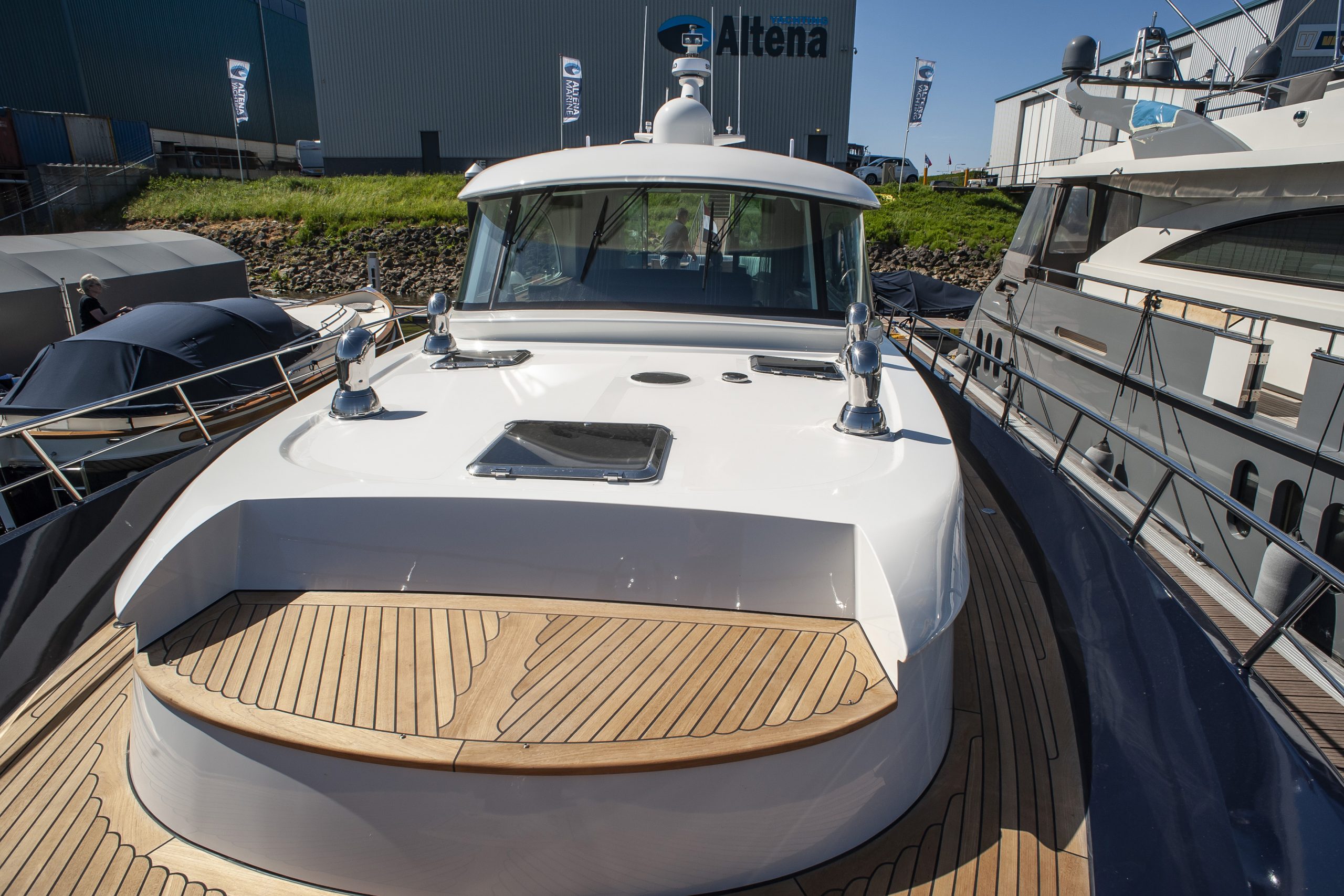 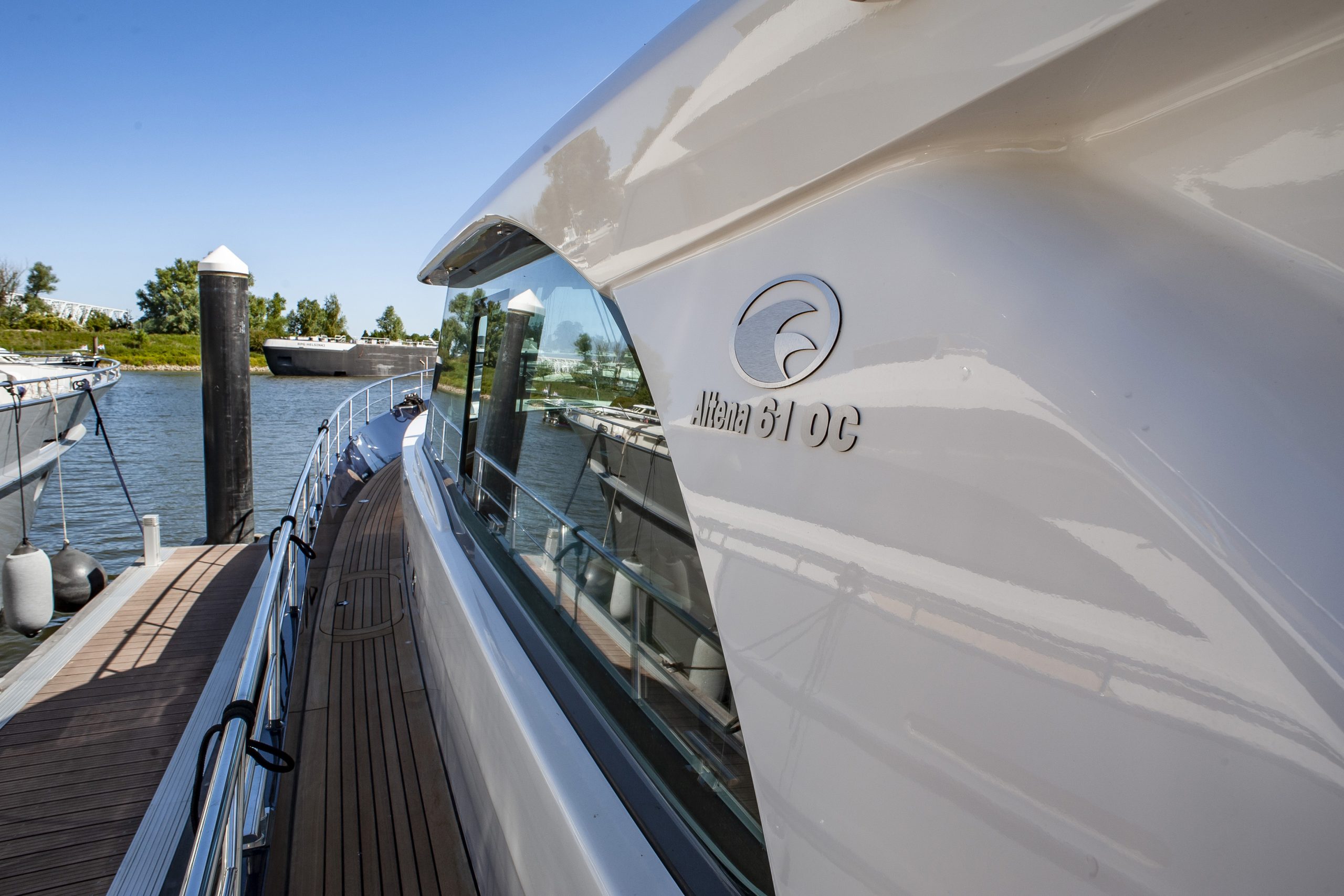 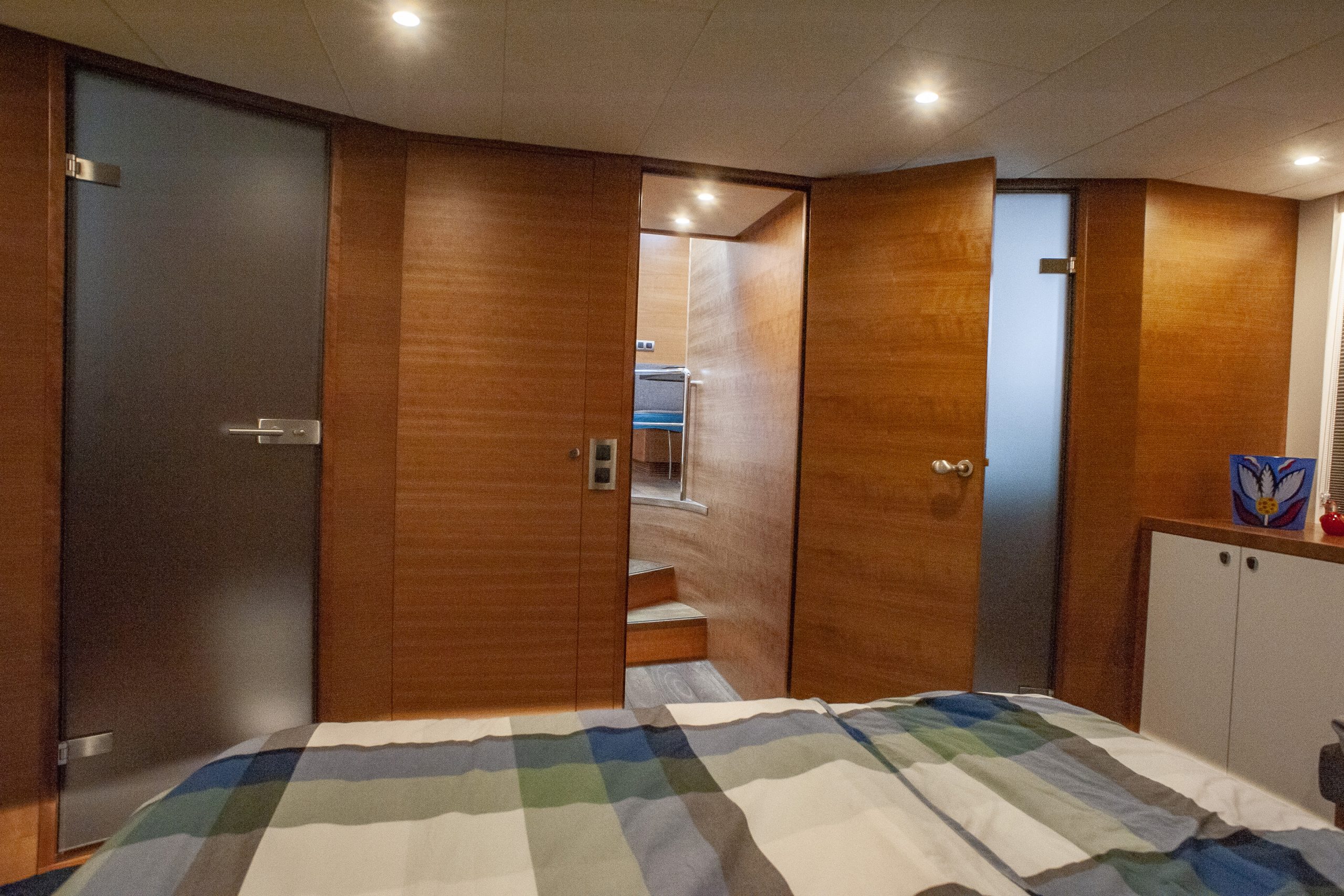 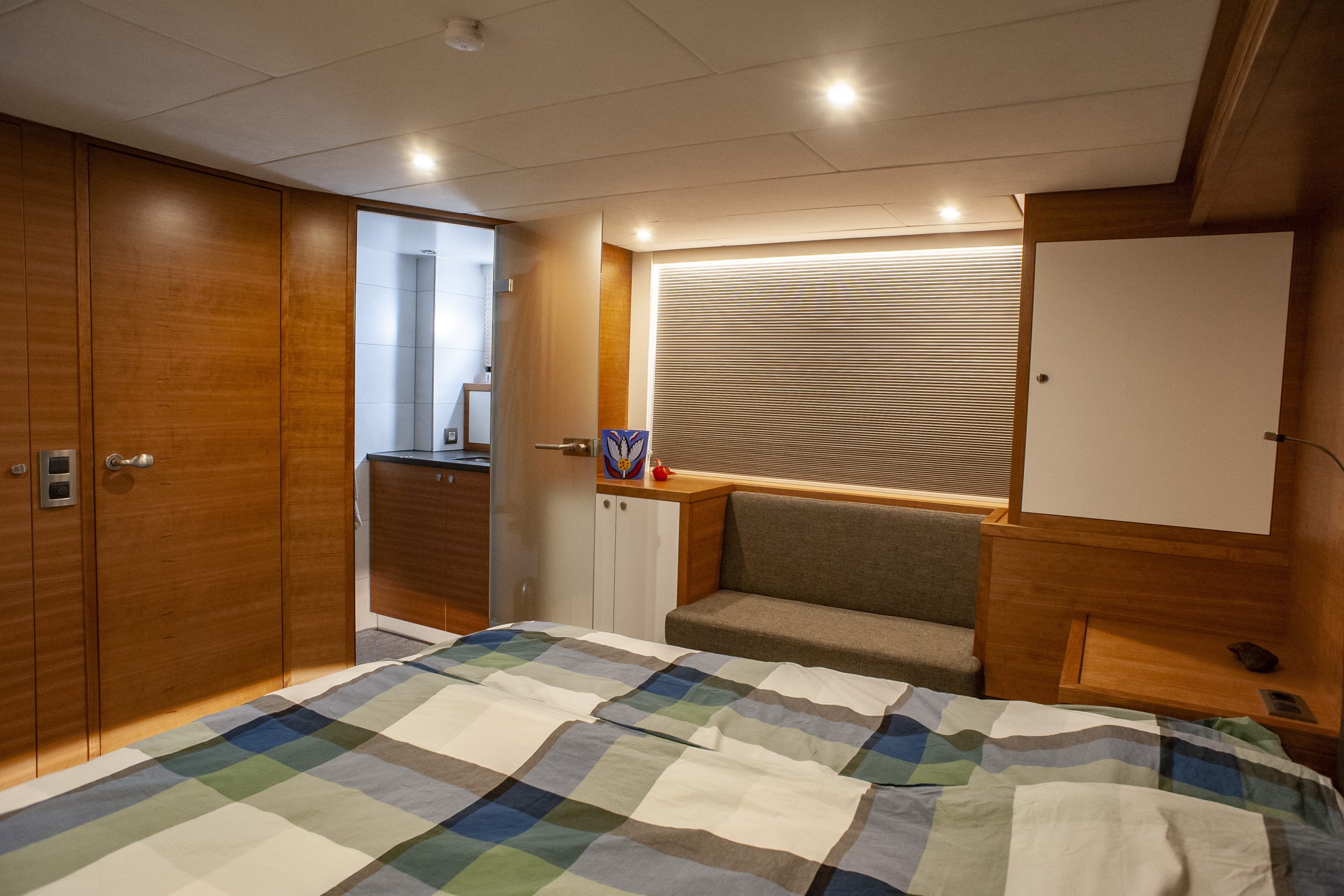 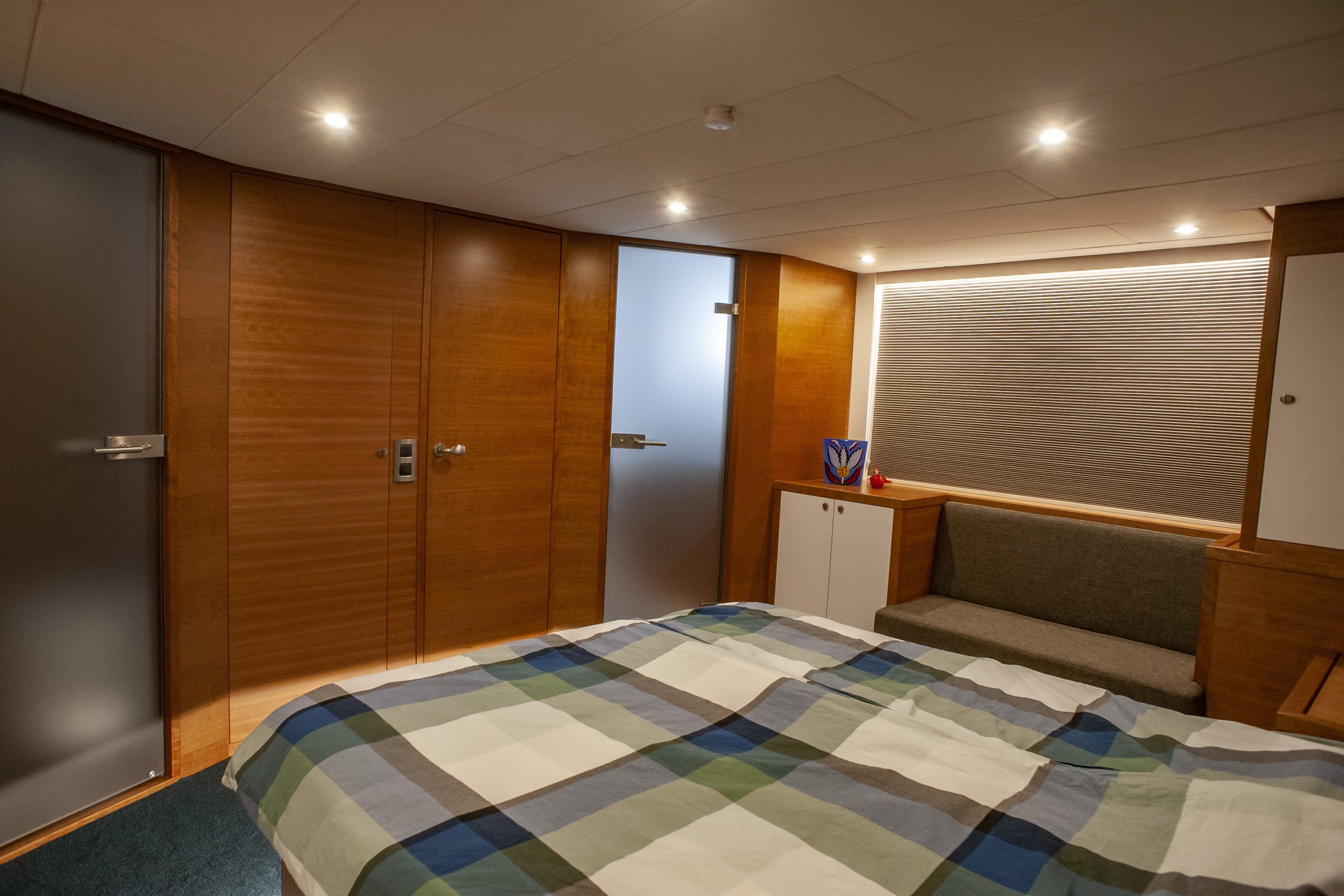 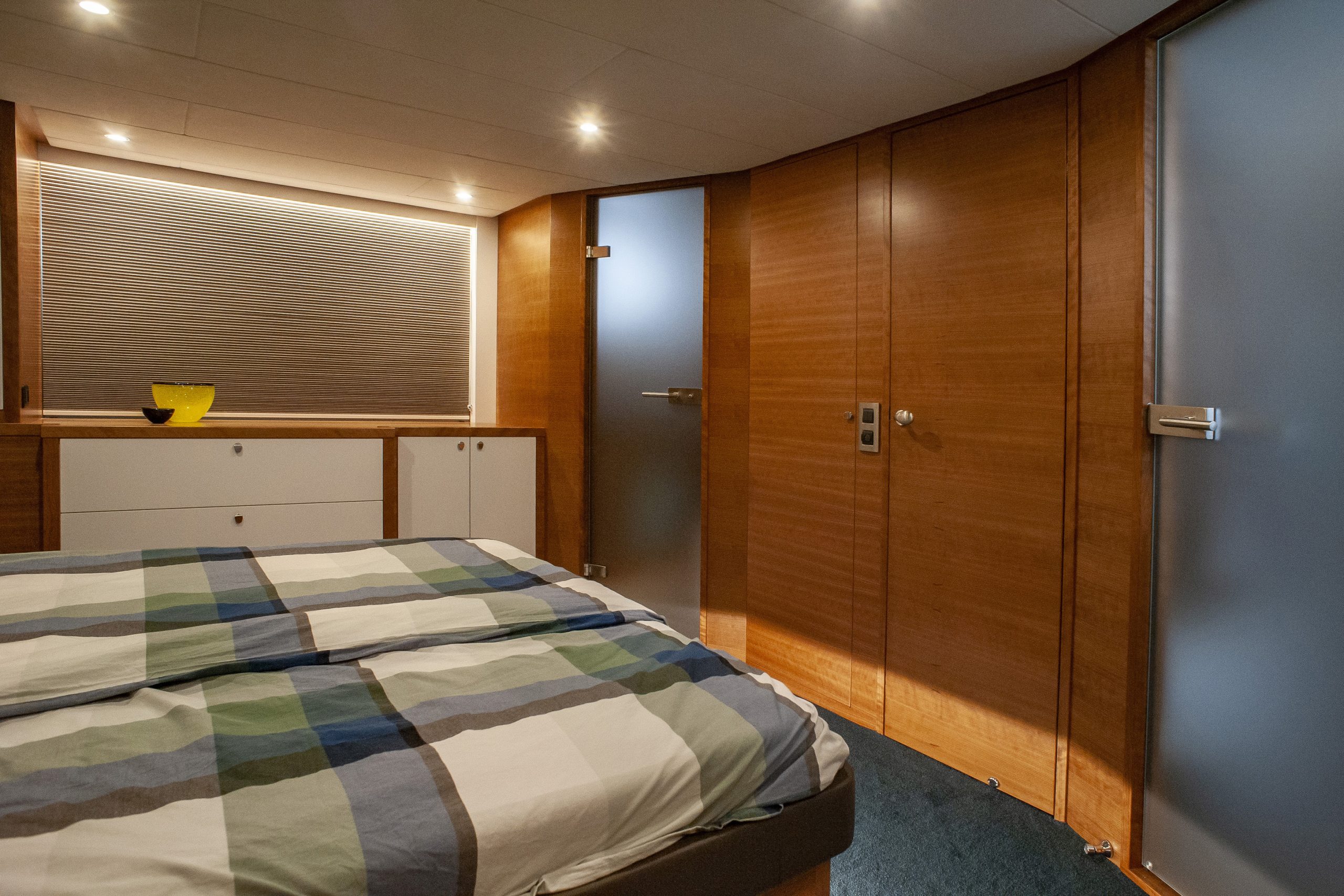 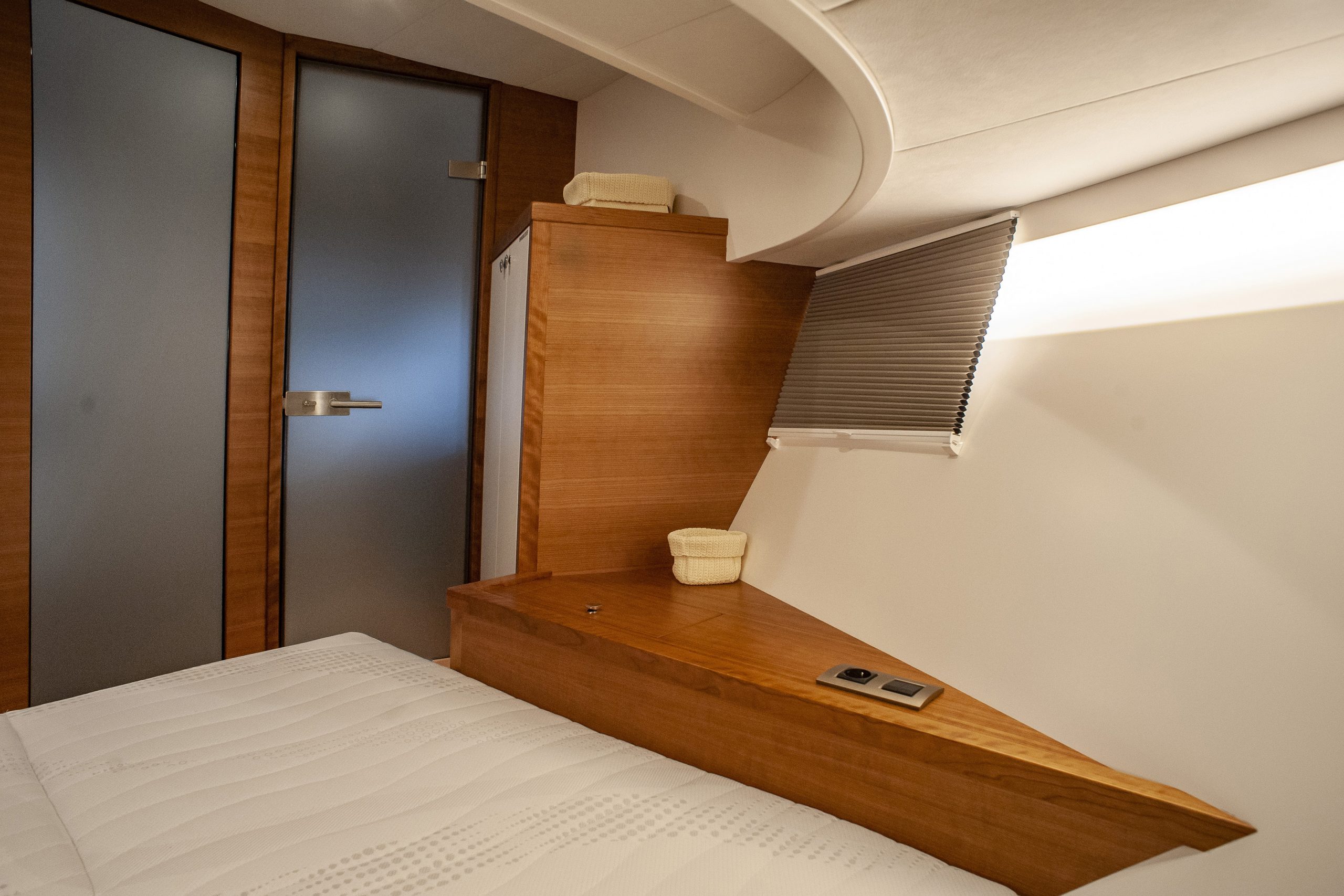 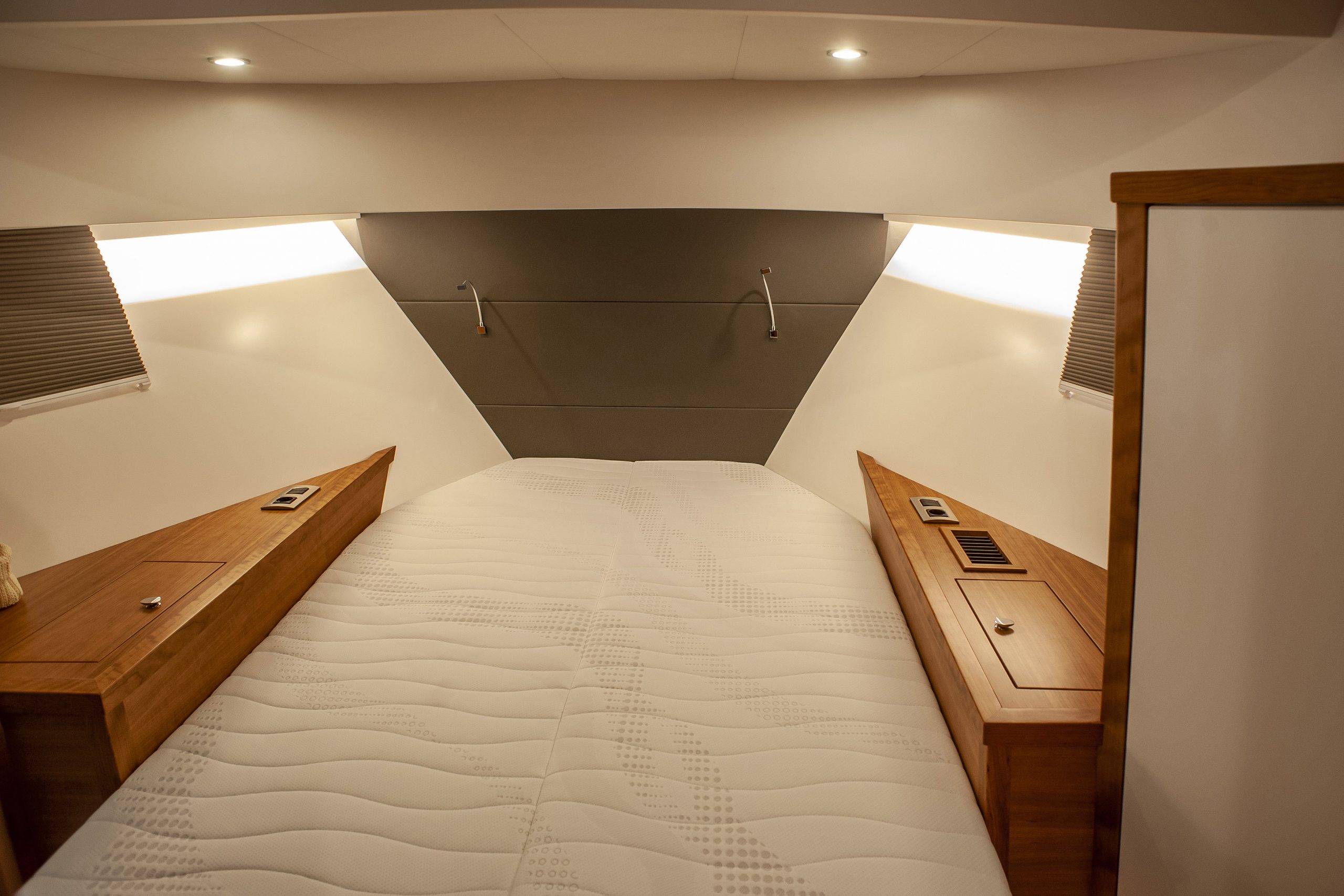 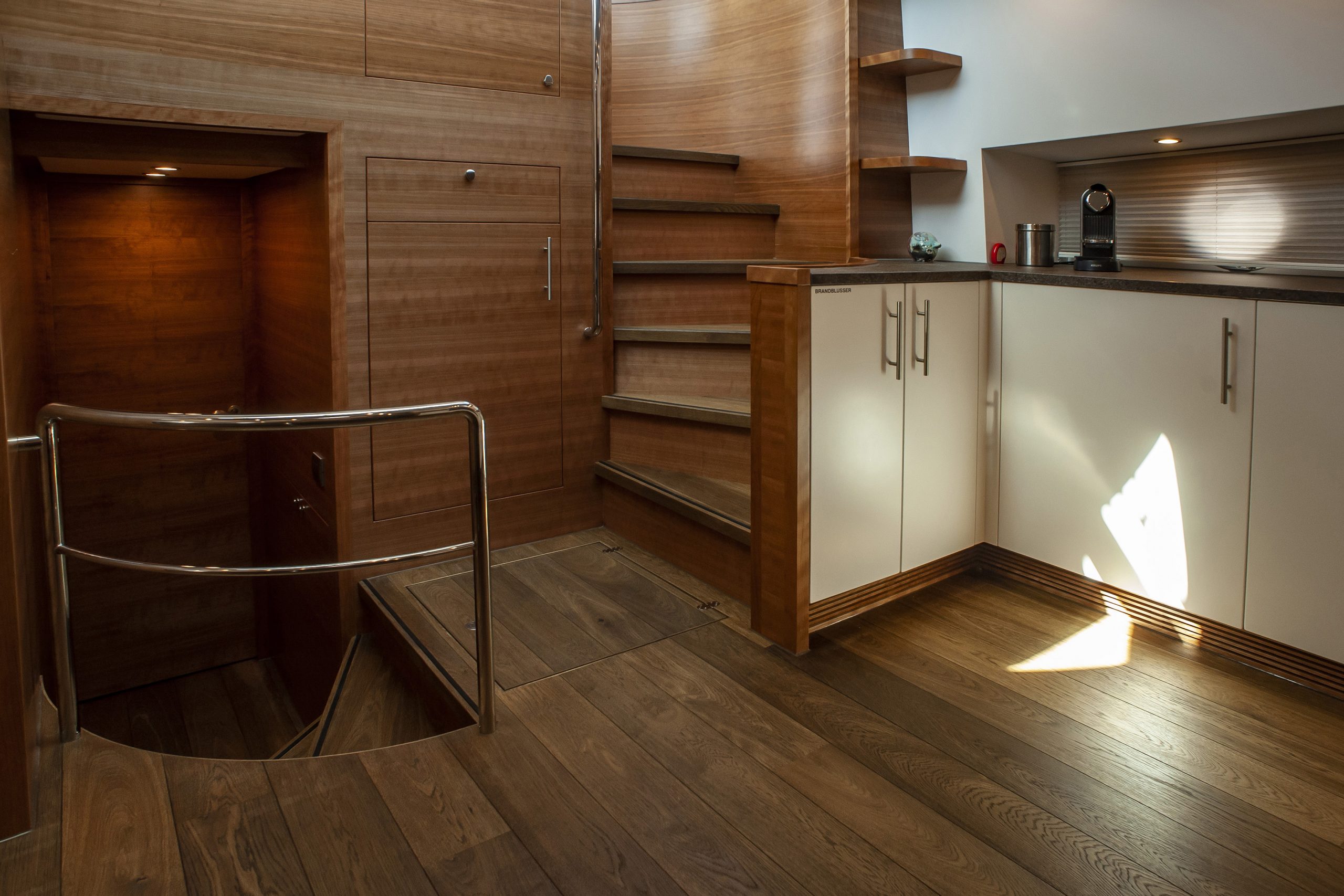 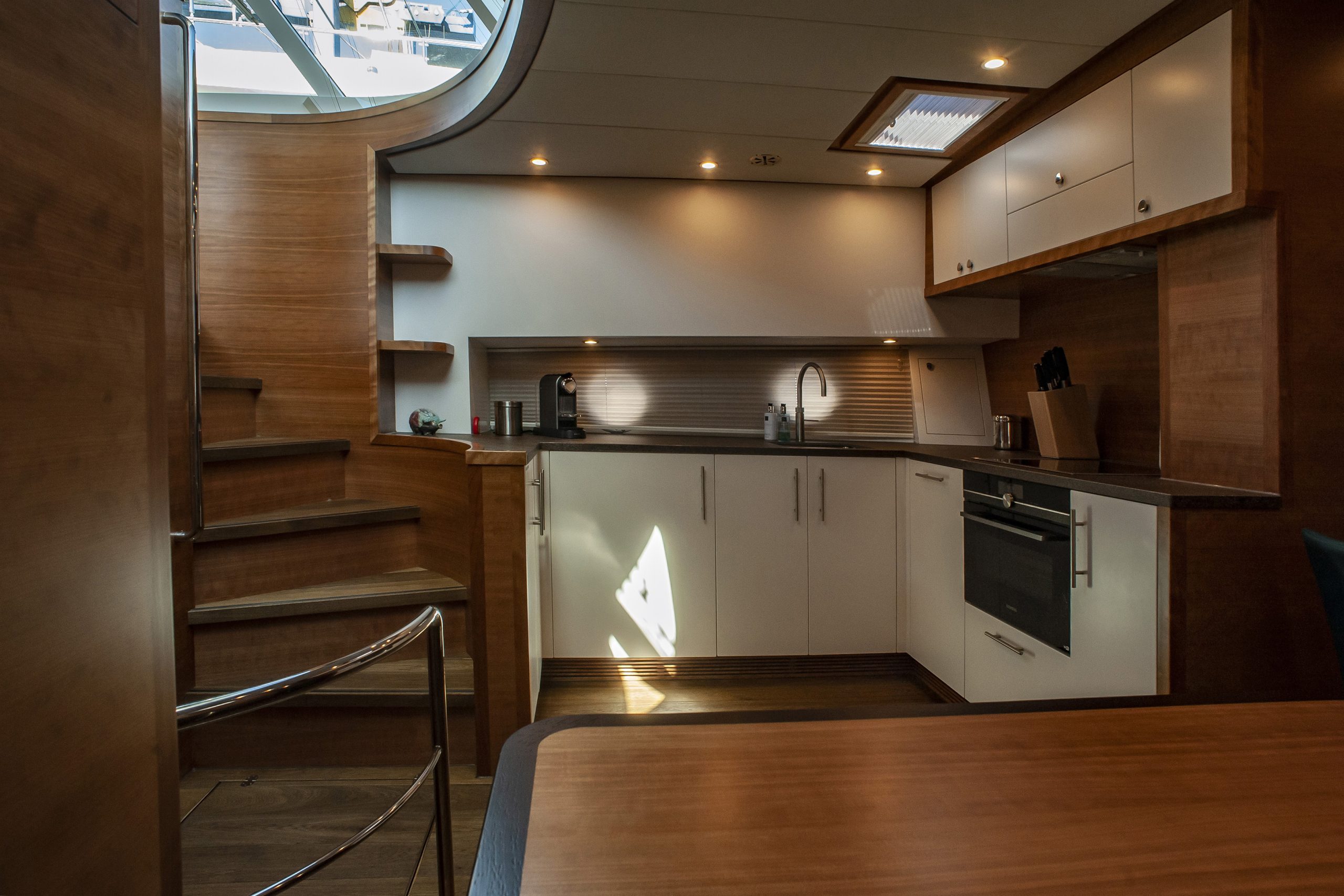 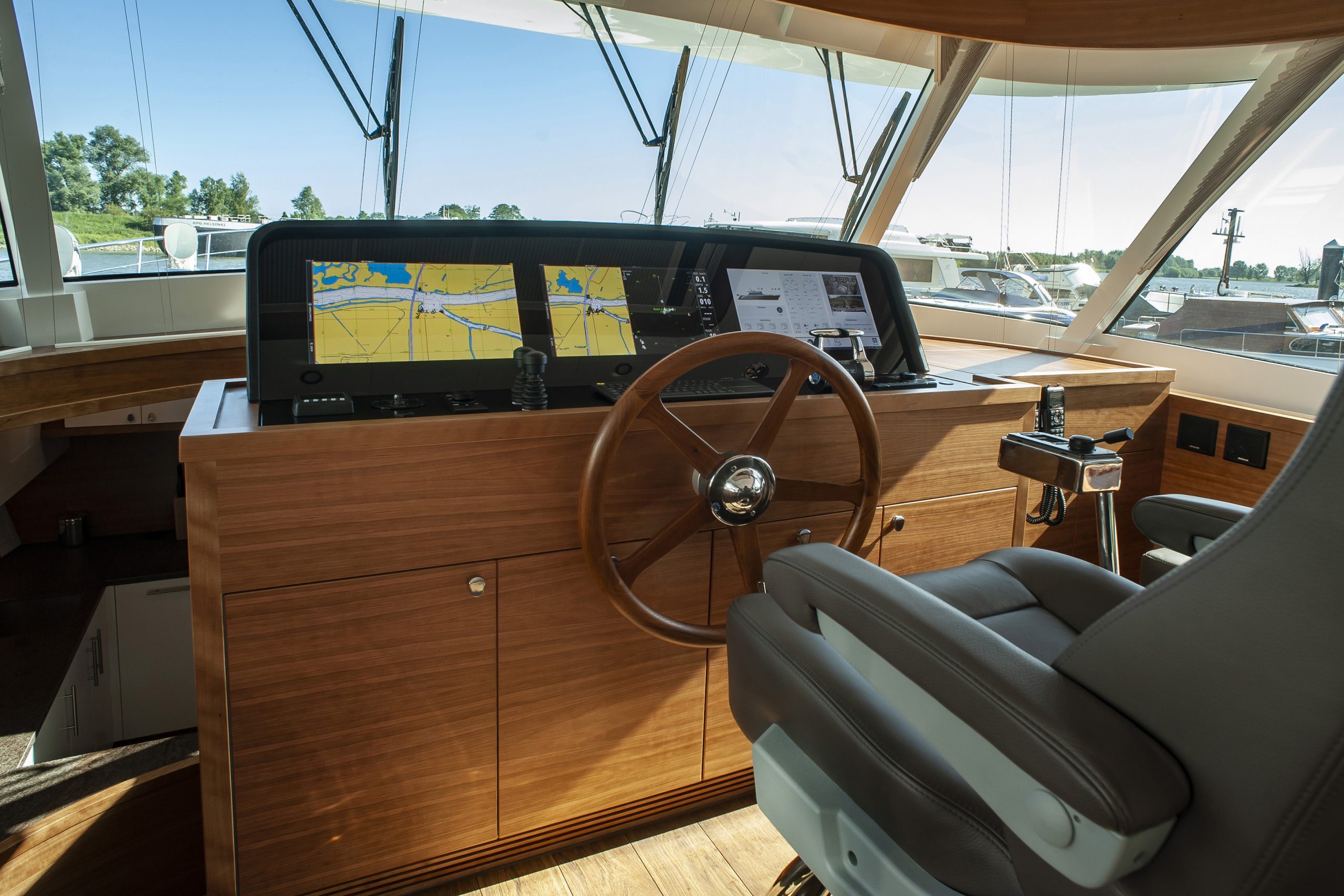 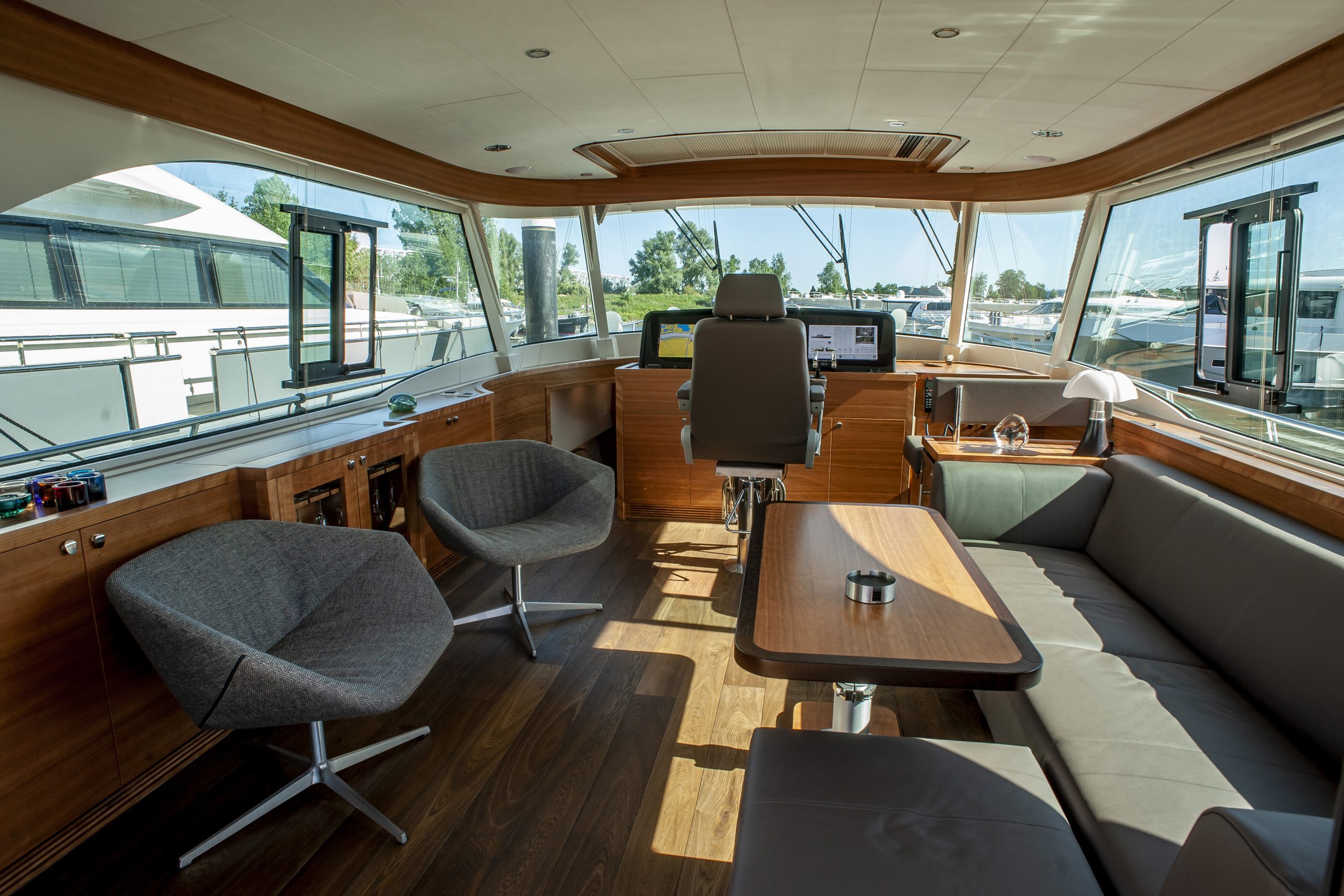 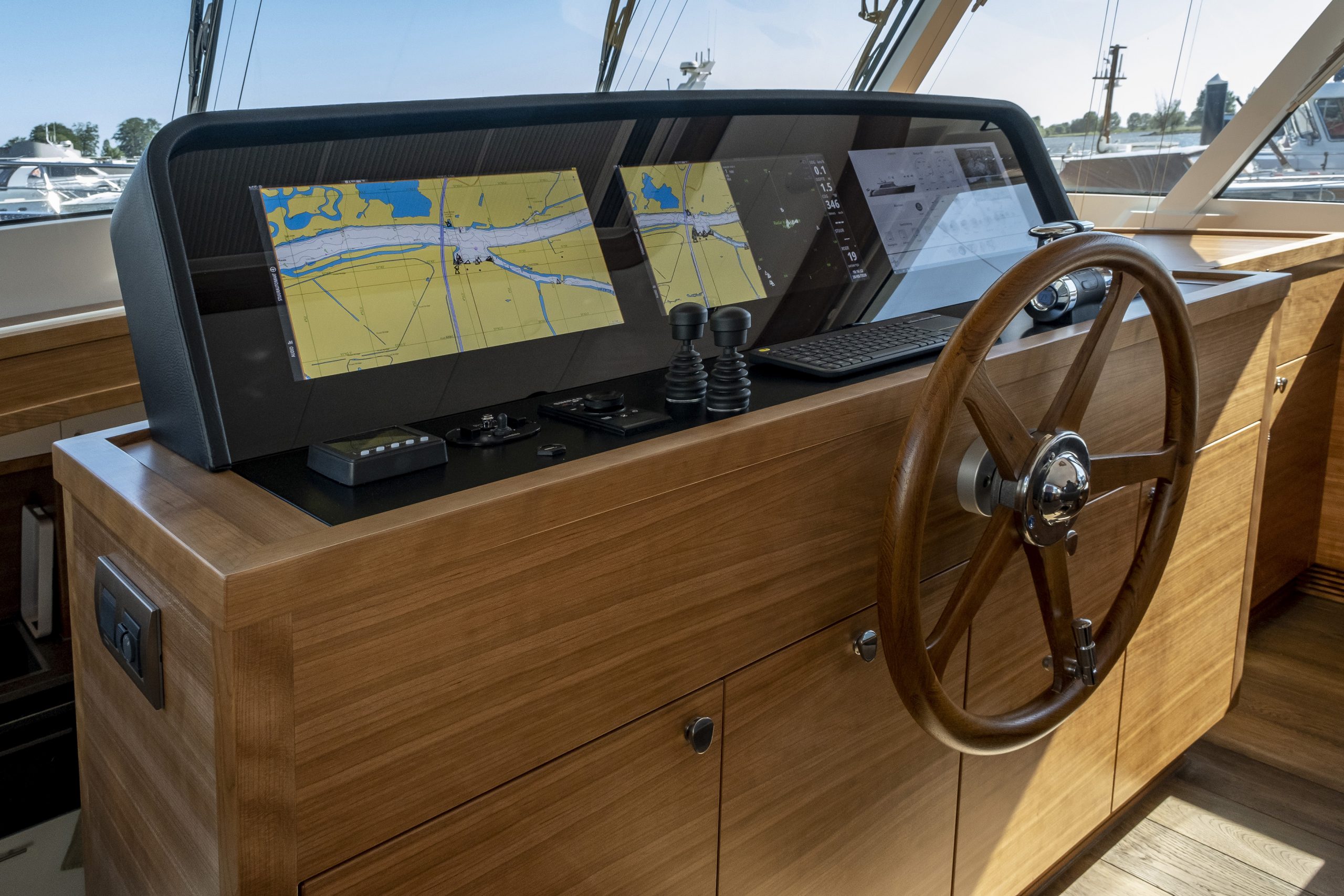 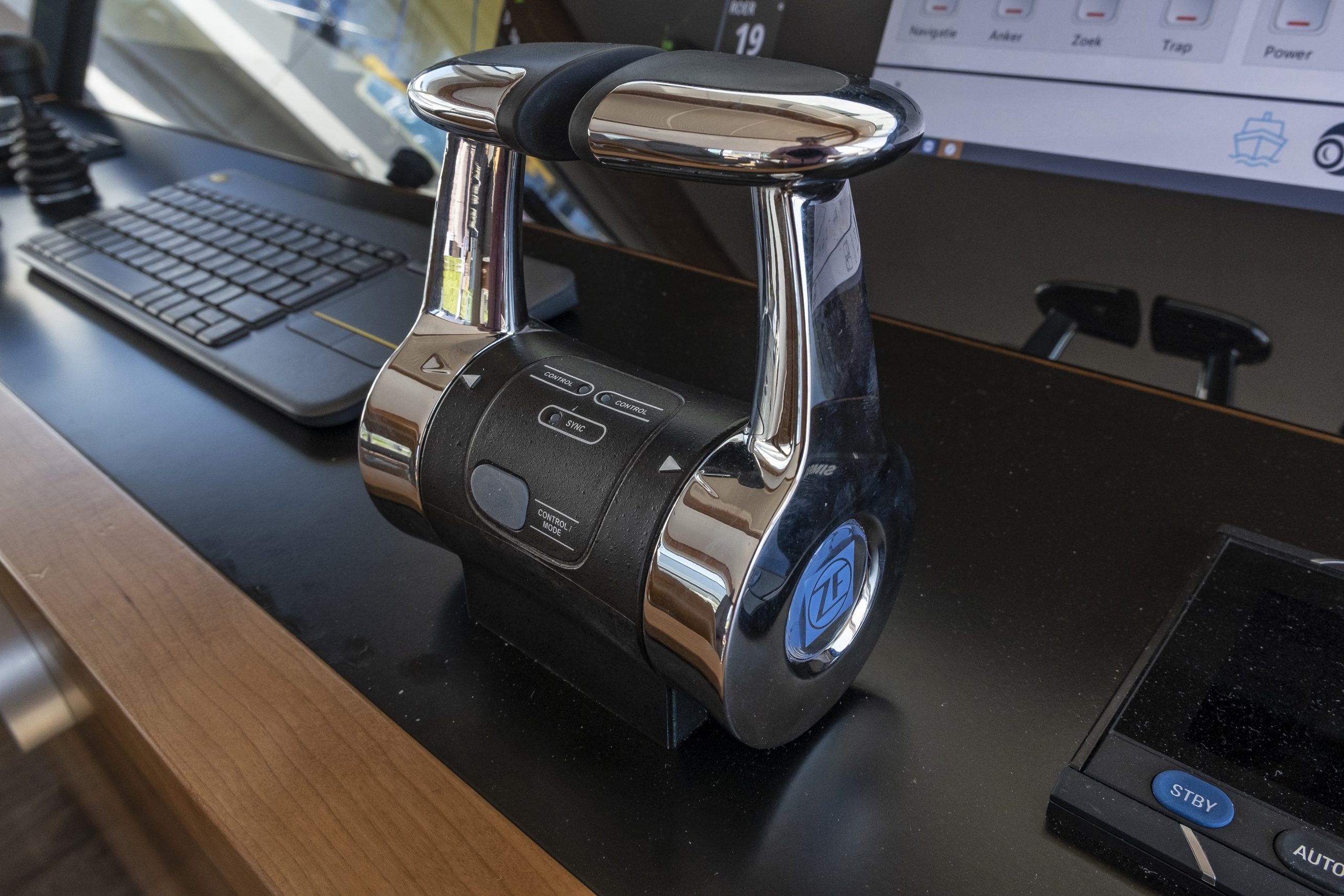 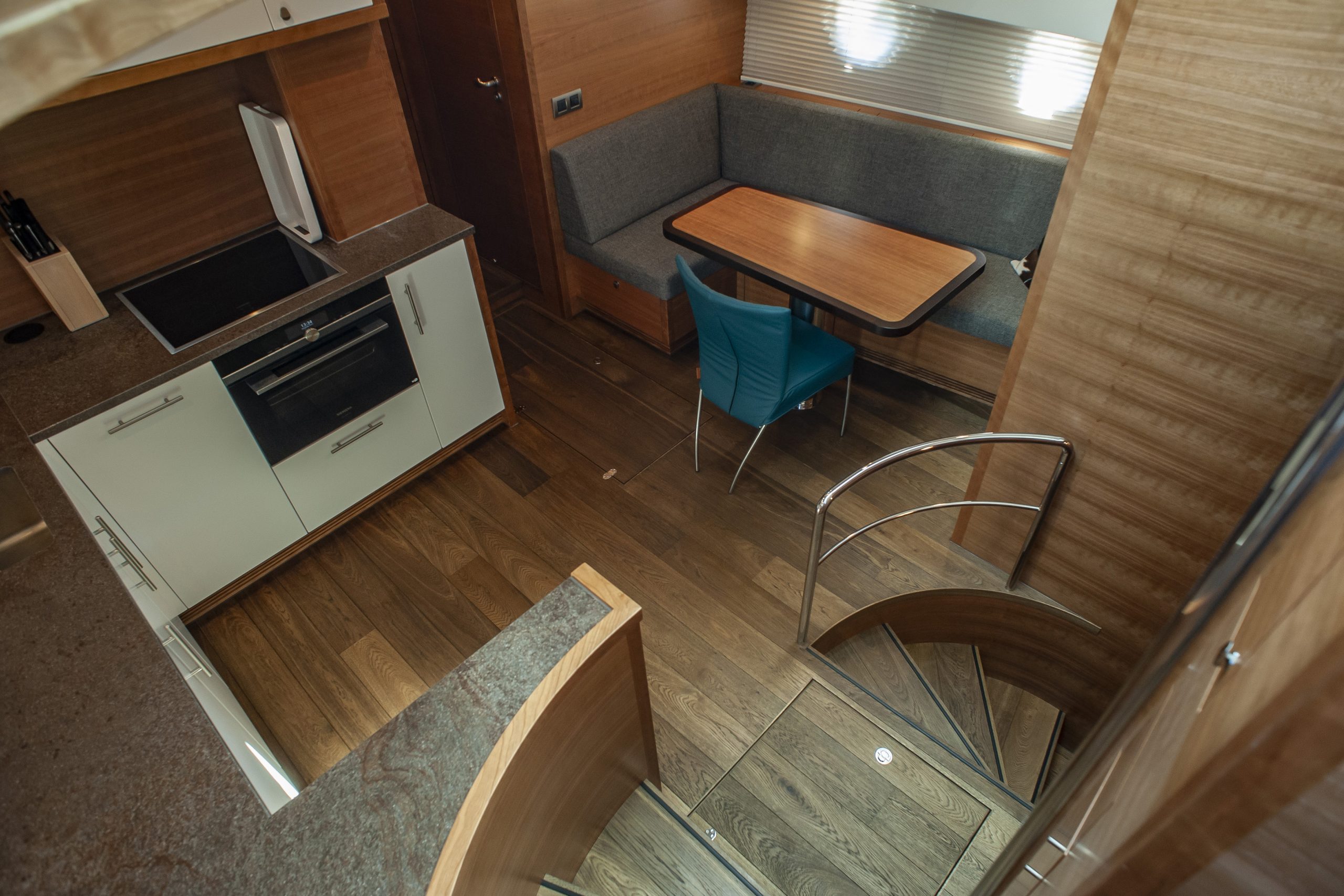 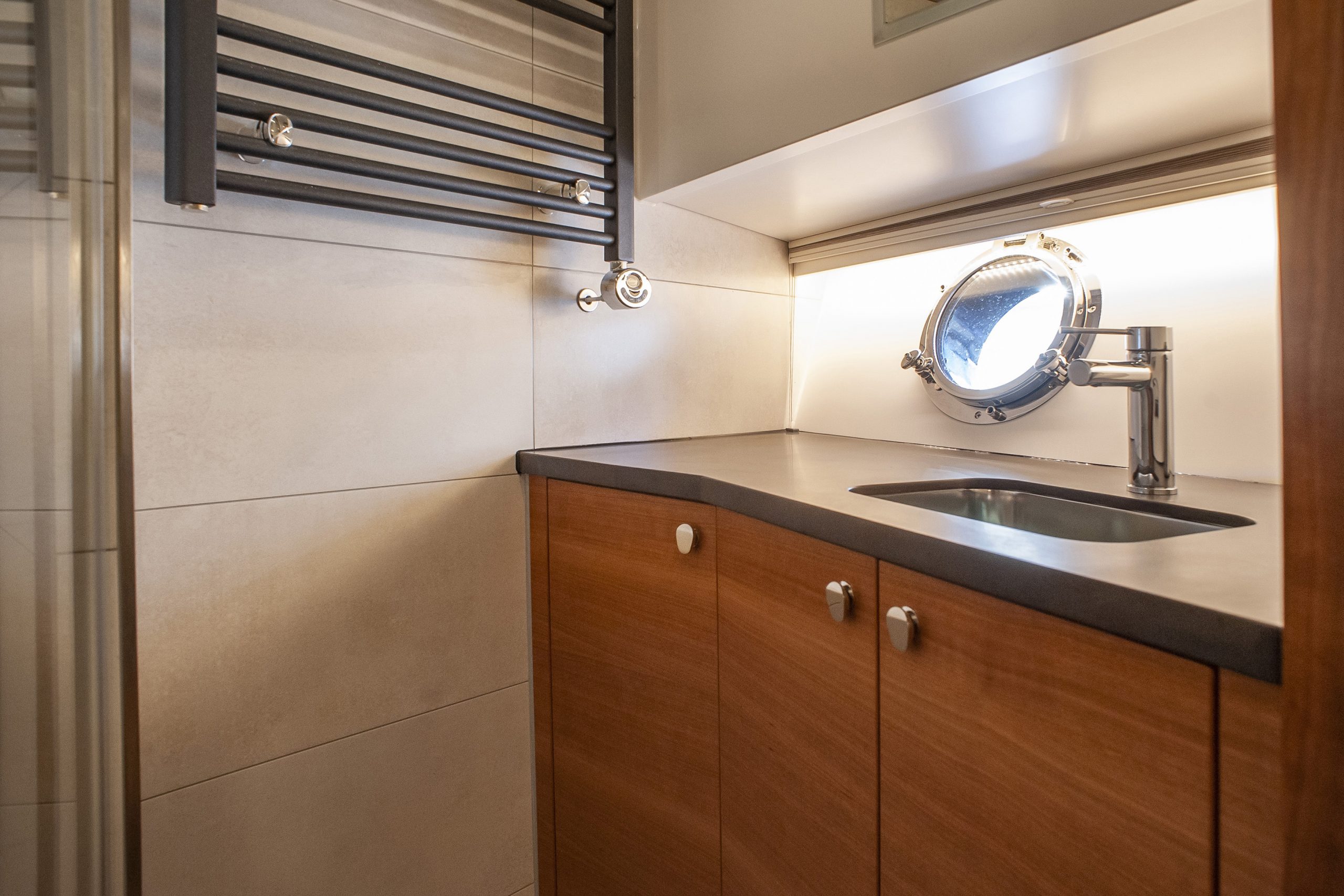 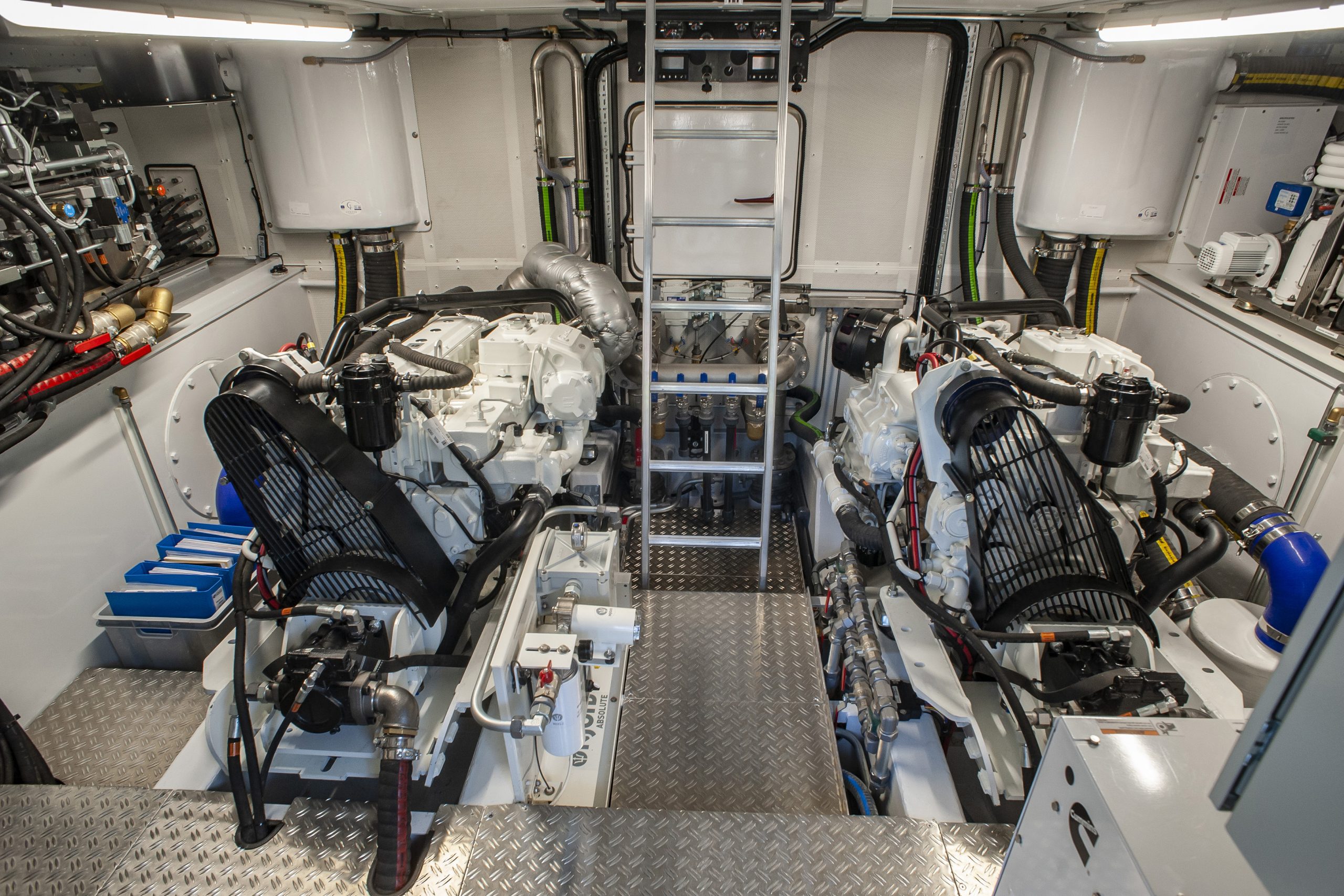 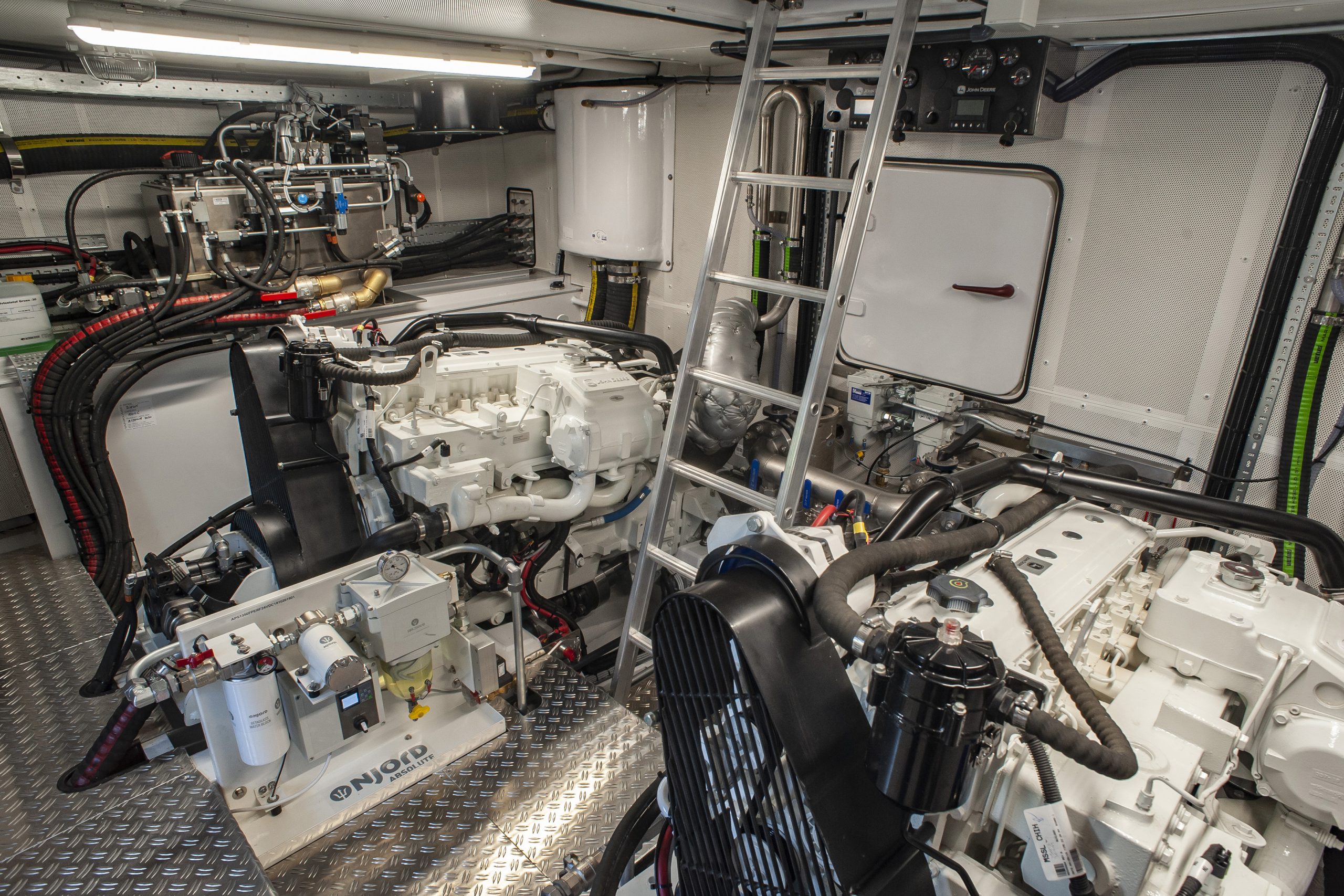 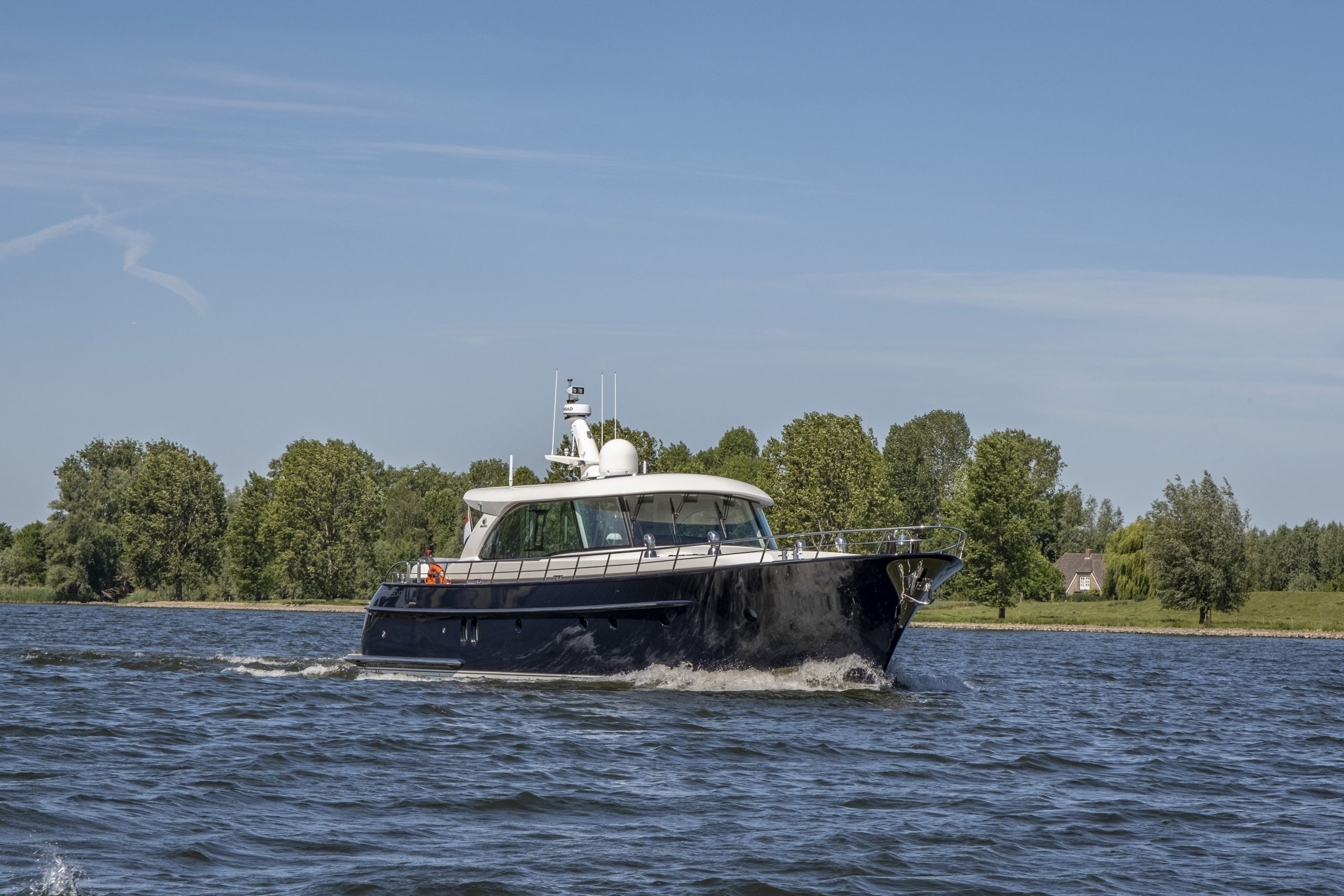 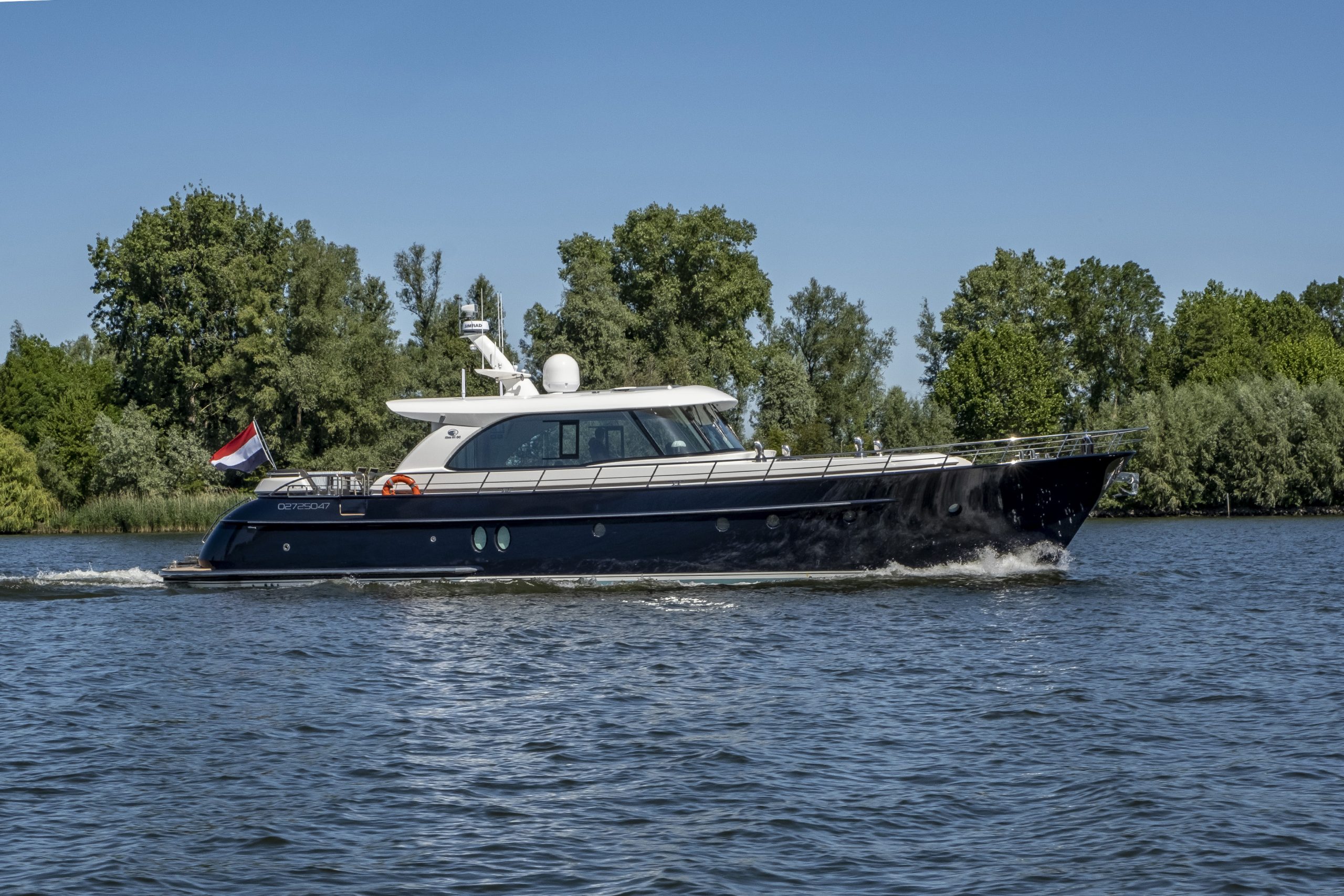 More information about this model? Send us an e-mail.